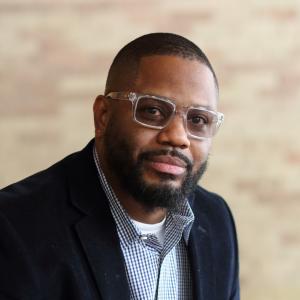 Darel Ross II has had a passion for serving the Grand Rapids community his entire life. Upon graduation from Ottawa Hills High School, he attended Alabama A&M University where he received a degree in Finance.

Feeling a strong connection to the neighborhood he grew up in, Ross returned to Grand Rapids and successfully opened and managed an insurance agency on the Southeast side.

In 2008, Ross was named Co-Executive Director of LINC UP. A Newsmaker of the Year according to the Grand Rapids Business Journal, Ross has helped secure over $67 million in funding for community improvement efforts resulting in over 300 families increasing their assets, training over 600 residents, improving over 750 homes and creating over 120 full-time jobs during his tenure at LINC UP. In addition to his role at LINC UP, Ross has continued to work as a community advocate on a broader scale by serving in many capacities including as an appointed member of the City Hiring Practices and Review Committee, Greater Grand Rapids Equity Network Leadership Team, founding board member of Equity PAC, Grand Rapids Affordable Housing Task Force and the Grand Rapids planning commission.

In February 2017, Ross was announced as one of the Directors of Start Garden. Always working to transform the underlying systems that prevent economic growth in the community, Ross views the work at Start Garden as a dramatic expansion of the entrepreneurship development begun at LINC UP. As co-owner in a few neighborhood small businesses, he is both economic developer and entrepreneur.